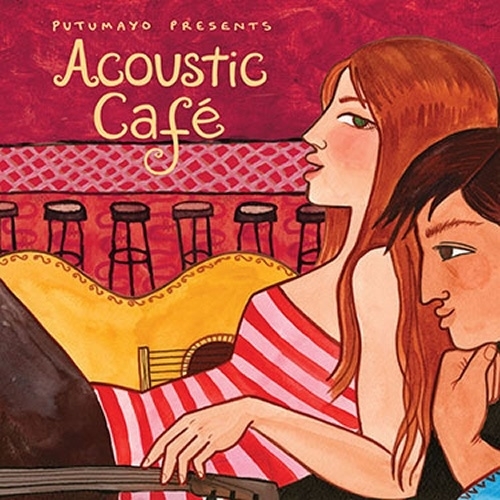 A captivating collection of singer/songwriters from the US, Canada, South Africa and Australia

Acoustic Café combines the best elements of Putumayo‟s successful Acoustic and Café series, which together have sold more than 2 million copies. On Acoustic Café, Putumayo features rising young stars and new discoveries. In keeping with their global approach, the artists hail from around the globe. American singers such as Trevor Hall, Justin Townes Earle, Sarah Jarosz, are represented, while Harry Manx (Canada), Gregory Alan Isakov (South Africa) and The Waifs (Australia) are featured as well.

These innovative artists offer a variety of vocal highlights, from the bluesy folk stylings of Brown Bird (“Danger and Dread”) to Trevor Hall’s contemporary “The World Keeps Turnin.‟” Harry Manx’s cover of Van Morrison‟s “Crazy Love” and Sarah Jarosz’s rendition of Bob Dylan‟s “Ring Them Bells” demonstrate the power of contemporary artists to re-interpret beloved classics in their own styles. Justin Townes Earle showcases his distinctive dark and raspy vocals with an Americana edge on “One More Night in Brooklyn,” while The Sweet Remains offer beautiful harmonies on “Dance With Me.” Gregory Alan Isakov brings a modern folk sound to “The Stable Song” while Lucy Kaplansky hews to a more traditional folk sensibility on “Manhattan Moon. “Fences tells a tale of lost love on “From Russia With….” and Jon and Roy offer the uplifting “Any Day Now.” The Waifs from Australia round out the collection with their upbeat energy on “Love Serenade.”