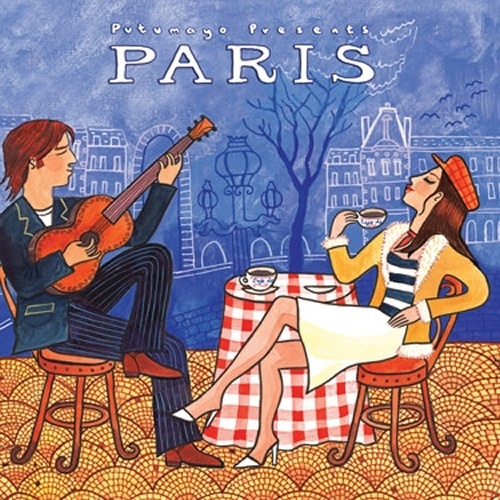 In the case of most trends, what is old becomes new again. Your grandmother’s pearls show up on today’s supermodels; her favorite crooner reappears decades later as the toast of the town. Even in Paris—the city that’s always en vogue—this phenomenon occurs time and again. The Paris of your grandmother’s time was alive with the songs of a genre called chanson. Very traditional in its sound, chanson was rediscovered and revamped in the late 50s and early 60s before it once again became passé with younger audiences, who embraced rock and pop as the sound of their generation. Now, forty years later, a new school of musicians has given a fresh voice to this vintage sound, creating the nouvelle scène (new scene) that is all the rage in Paris.Paris is an introduction to a vibrant group of artists out to prove that this is not your grandma’schanson.

Opening the album is a track from one of the leading artists of the nouvelle scène, Thomas Fersen. On “Au Café de la Paix,” Fersen channels the spirit of famed 60s chanson artist Serge Gainsbourg with darkly ironic lyrics over a sweet, bubbly melody. On its surface innocent and simple, the song takes a turn toward the twisted as the delusional author confuses a lover he’s never met and a house they’ve never lived in with a woman from his past. The song ends with Fersen wishing the woman would come visit him in his new home—underneath a bridge.

Soft and lovely, the acoustic track “Quelqu’un m’a dit” glows with the same beauty as its composer, French supermodel Carla Bruni. Her crooning lyrics confirm why the French are often said to be among the most passionate people in the world: “I’m told that our lives aren’t worth much/ Passing in an instant, like wilting roses/ Yet someone told me that you loved me still/ Could that be possible?”

Heartbreak and passion are recurring themes in this collection, but the group Tryo offers a welcome lighthearted interlude. With catchy rhythms and melodic hooks, Tryo writes songs for their fans to “whistle in the shower.” On “Serre-Moi,” this intention is fulfilled through a unique blend of French chanson and acoustic reggae.

Many of the nouvelle scène artists work similar global fusions into their music. Brazilian and Latin rhythms, stirred up with chanson and electronica, prove an excellent recipe for songs by Pascal Parisot. His lounge-y vocals, humorous lyrics and swinging rhythms on “Je Reste Au Lit” are reminiscent of the very mod 60s sound. The breezy samba-flavored track from Keren Anndisplays her global influences and shows off the songwriting style that has been the cornerstone of her successful career. And on “Samba de Mon Cœur Qui Bat” Coralie Clément embraces the same alluring style with a breathy timbre that drifts elegantly over samba piano runs and trombone riffs.

And so, in France, the old once again becomes new. Time races on, and a new generation of musicians set the stage for the future by looking to the past. Putumayo invites you to experience this new wave of classic music—a Paris perfect for both you and your grandmother. This album also makes the perfect companion piece to the hugely successful French Café.