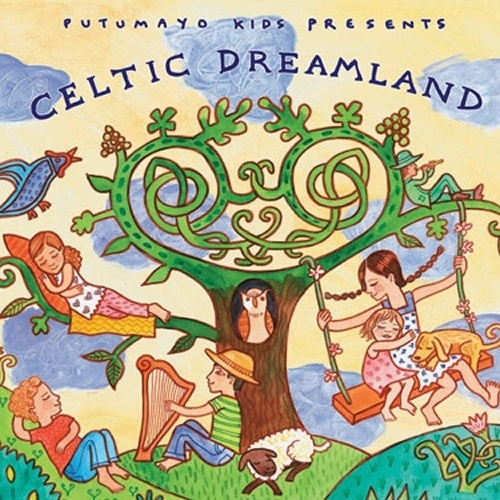 Beautiful and lyrical songs for bedtime or relaxation from the rich traditions of Ireland, Scotland, Canada and beyond.

Celtic music has long been known for both its danceable jigs and reels and its tranquil, beautiful melodies. Putumayo Kids focuses on the softer side of Celtic music, harvested from the rich musical traditions of Ireland, Scotland, eastern Canada and beyond. Celtic Dreamland features songs that are perfect for the slumbering child, meditating mom and dad or the weary worker desperate for a little quiet relaxation.

Artists on Celtic Dreamland include some of the most renowned Celtic musicians in the world.Karen Matheson, widely recognized as the haunting vocals of Scottish super-group Capercaillie, contributes the lilting “An Fhideag Airgid” (The Silver Whistle). With family roots on the Canadian island of Cape Breton, Mary Jane Lamond's childhood was steeped in the region's strong Scottish heritage, and it's not surprising that she fell in love with Gaelic music. “Cagaran Gaolach” (Loveable Little Darling) is a classic lullaby from this rich tradition. The incomparable Scottish singer-songwriter Dougie MacLean provides the aptly-titled “Goodnight and Joy,” and Seamus Egan, from the well-known Irish-American group Solas, adds the lovely “When Juniper Sleeps.”

Other well-known artists featured on Celtic Dreamland include Irish harpist Áine Minogue, who has entertained presidents and prime ministers. The versatile Irish musician Susan McKeownhas a distinct talent for making the music her own, whether she's performing solo or alongside Malian griots, mariachi musicians or other international collaborators. Canadian vocalist Teresa Doyle, Scotland native Mairi MacInnes, Scottish duo The Cast and Irish songstressLasairfhíona Ní Chonaola add the finishing touches to this soothing release.