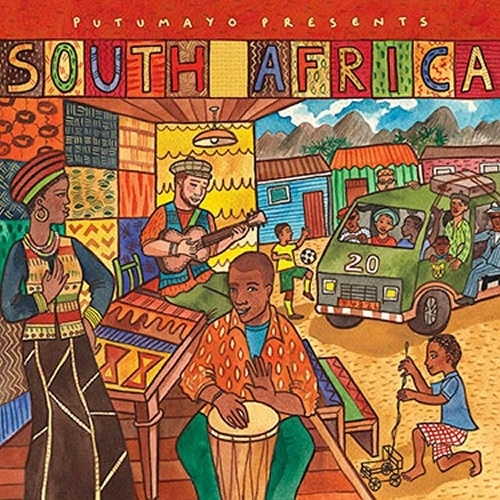 A celebration of the musical diversity of South Africa, from Afro-jazz and township jive to mbaqanga and Afropop

The Vancouver Sun: “From the opening track, a bouncing dance number by the Soul Brothers, to the closing a cappella song by the Soweto Gospel Choir, this is music that lifts the spirit and sways the body.”

All Music Guide: “Putumayo Presents: South Africa is one of the best entries in this long series of compilations.”

Weekly Alibi: “As a whole the album is as relaxing as sunbathing on a tropical beach…”

Putumayo presents South Africa, a CD collection that celebrates the rich musical diversity of this unique country at the southern tip of Africa. With the soccer World Cup taking place for the first time on African soil from June 11 to July 11, international attention will be focused on South Africa and its postapartheid status as a democracy and economic powerhouse.

Over the course of its history, this “Rainbow Nation” with 11 official languages has nurtured many musical styles, including mbaqanga, kwela and township jive, among others. While South Africans have endured many struggles, they have often used music as a tool to protest and to express their hopes for a better future.

A portion of Putumayo’s proceeds from the sale of this CD will be donated to Artists for a New South Africa (ANSA), a non-profit organization working in South Africa to combat HIV/AIDS and advance human rights.