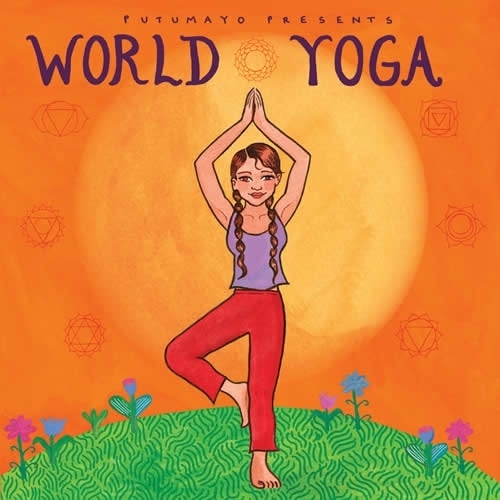 Take a relaxing journey around the world with these soothing songs from Mali to Nepal and beyond.

Planetary Calm: Putumayo’s World Yoga Finds the Global Sound of Restorative Relaxation
Yoga is global. Throughout the world, people of all ages and backgrounds are practicing yoga to relax and rejuvenate and musicians are creating music to accompany it. This planet-wide interest in the age-old Indian practice inspired World Yoga. Drawing on contemplative sounds from Wales to Tibet and Armenia to Uganda, this collection leads listeners to deeper relaxation and connection with life. With an engaging balance of more traditional yoga sounds—mantra-based pieces with Indian elements—and unexpected acoustic gems from Africa and beyond, World Yoga reflects the practice’s planetary impact and grace.

“Yoga has become a global experience, and we wanted to expand the music beyond the traditional soundtrack,” explains long-time yoga instructor and musician Sean Johnson, who advised on the album and contributed the beautiful chant “Ramachandra.” “We tried to reflect yoga’s full geographic scope.”

Created from Putumayo’s massive music library and tested in Johnson’s New Orleans yoga studio, World Yoga follows the same arc as a yoga class. It begins with a call to focus and quiet the mind and body, thanks to the lush, evocative voice of Gambian-British singer Sona Jobarteh (“Reflections”). Later tracks offer more dynamic moments, without breaking the flow or concentration. And the album closes with deeply relaxing songs such as Tibetan-Nepalese singer Kelsang Chukie Tethong’s “A Prayer to Dispel Sickness and Harm,” designed to accompany the more meditative period of practice.

These songs hail from disparate yoga, musical and cultural traditions, such as the Kundalini tradition as expressed through Mexican singer Mirabai Ceiba’s “Ong Namo.” They may flow from regional roots (the Welsh electronic folk of 9Bach) or display an electronica kick (DJ Drez’s “Floating Sweetness”).“I can’t recall ever feeling so relaxed as I have while listening to the tracks on the collection,” says Putumayo Founder Dan Storper. “Whether driving in traffic or dealing with work-related stress, these songs helped transport me to a much more peaceful and happier state.” The diversity of World Yoga reflects yoga’s ability to transcend borders and cultural barriers, to move people of different backgrounds. The music promises to turn a daily commute or next round of yoga practice into a meditative yet energizing experience.