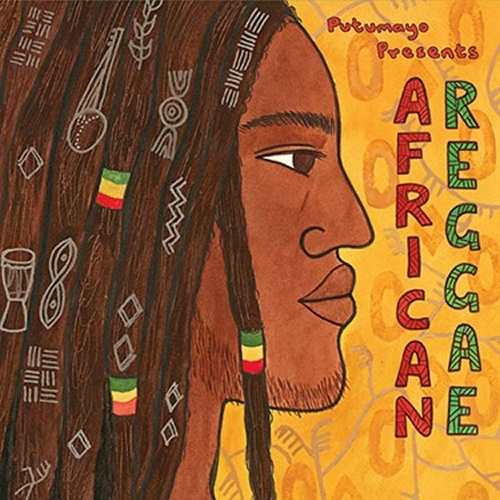 Cultures converge on this jammin’ collection of reggae beats from Africa.

African Reggae is, in part, an homage to Bob Marley’s powerful impact on African music. This collection features selections by outstanding African musicians who have built upon Jamaica’s “golden age of reggae” in the 1960s and 1970s by weaving together traditional and modern sounds into a vibrant musical fabric.

When reggae evolved from ska after Jamaica’s independence in 1963, it quickly dropped its seeds in Africa, the true land of its origin. Pioneering Jamaican artists Desmond Dekker and Jimmy Cliff were African favorites in the 1960s, followed in the next decade by Bob Marley, whose songs of African unity and liberation and concerts in Africa inspired all of the artists on this CD.

There is an uninterrupted connection between the cultures of Africa and Jamaica as African instruments, rhythms and chants were brought to the Americas and the Caribbean by slaves, eventually becoming blues, rhythm and blues, funk, jazz gospel and reggae. Nigerian reggae artist Majek Fashek has said, “If I was born in Jamaica, I’d still be an African. I do not play Jamaican reggae. Reggae is African.”

African Reggae vividly illustrates how African artists have kept the spirit of roots reggae alive from Cape Town to Cape Verde. This collection includes tracks ranging from the hit “Magno Mako” by Ivoirian Ismael Isaac to the melting pot brew of Burkina Faso’s Bingui Jaa Jammy and from the Rastafarian-influenced sounds of Ghana’s Kwame Bediako to the mystical kora-laced incantations of Guinea Bissau’s Nino Galissa.

Echoes of reggae masters from Jamaica abound as one can detect the influences of Jamaican keyboard legend Augustus Pablo, Peter Tosh and many others. African Reggae demonstrates the powerful influences of reggae on the continent of Africa and how African musicians have added their own unique flavors to create an exciting, fresh musical brew.

A portion of the proceeds from African Reggae will be donated to HOPEHIV in support of their efforts to strengthen the capacity of African children who have been orphaned or made vulnerable by HIV/AIDS. Since it began in April 1993, Putumayo World Music has contributed more than $1 million to an array of international charities working in areas where the music on its CDs originates.